HIKING TRAILS IN THE SAVINJA VALLEY 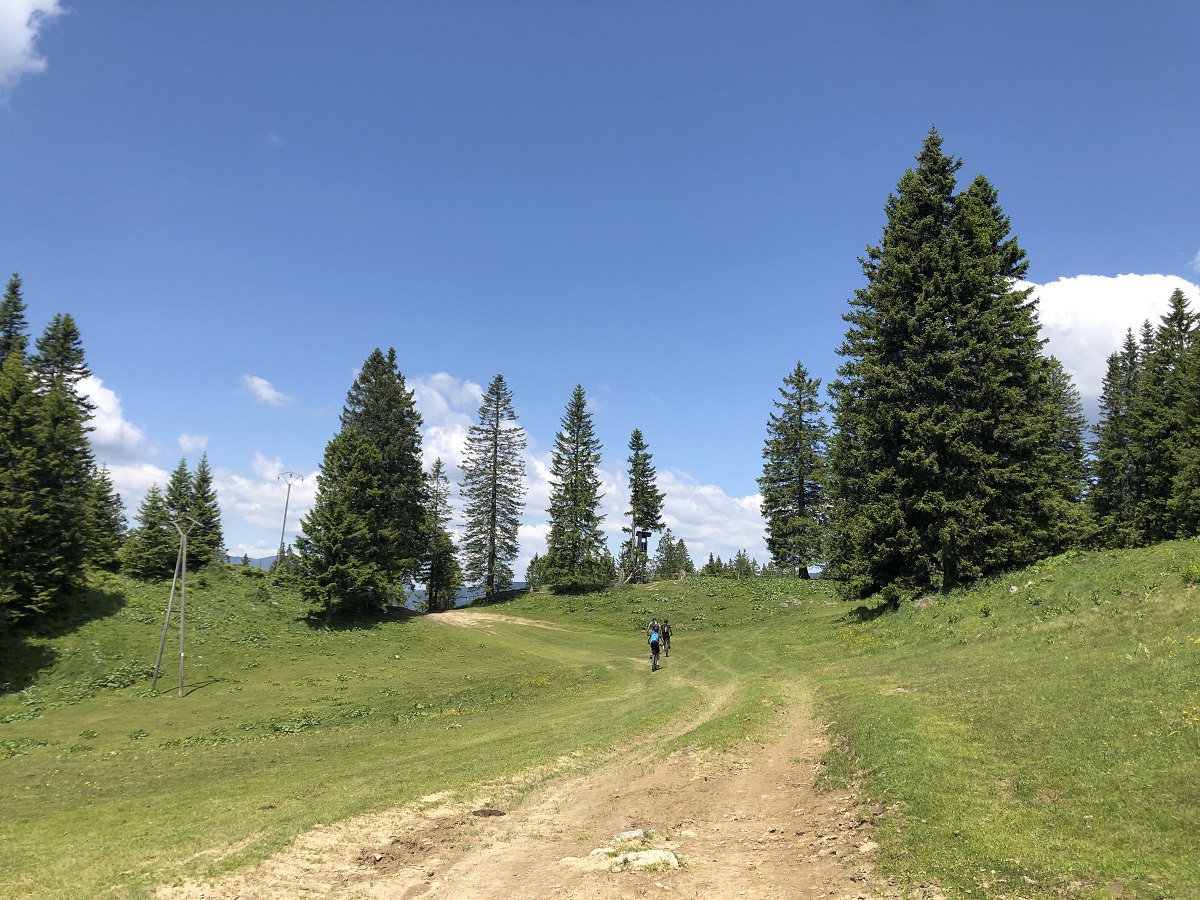 Savinjska is famous for its lush and wild nature. You can experience its beauty through mountain trails that criss-cross the Kamnik-Savinja Alps and walking and hiking trails along the green river Savinja, and there are also many landscape parks and protected nature areas that round off a pleasant and active vacation.

We have prepared a selection of 16 routes for you, which I know you will definitely not regret having walked. The routes are undemanding or moderately demanding and suitable for the whole family.

The rugged path to Klemenča jama and Strelovec will inspire you with views of the Logar Valley and the stunning, thickest larch in Slovenia.

POINT OF DEPARTURE: We drive to Solčava (to get here from the direction of Celje, via Kranjski Rak, Pavličevo sedlo or from Črna na Koroškem) and continue towards Logarska dolina. Turn left towards Logarska dolina (payment of the entrance fee for Logarska dolina) and drive along the road to the signs for Koča na Klemenči jami. We park in the parking lot near the Eco House at the Crossroads (only guests are allowed to park in front of the guesthouse) or drive 200 m further to the Dom planincev, where we park and set off on the trail.

Are you ready to win two thousand? Raduha (2,062 m) is a popular mountain spot that always rewards with divine views of the rugged Savinjska. A wide view, lush alpine flora and a marked mountain trail are the recipe for an unforgettable mountain day. You can go to Raduha from Koča na Loki, which will take you an hour and a half of easy walking, or you can start your journey at the entrance to the village of Luče, at the bridge over Savinja, and go to Koča na Loki on foot, which will take you 3 hours undemanding route and from there another hour and a half to Raduha.

The Šmihelska path leads to the Golte Landscape Park. On the way stands a granite monument to four fallen fighters who died in the fight against the occupier on July 2, 1944. It offers beautiful views of Mozirje. In Mozirje, follow the signs for Šmihel and park at the Baza bar, next to the church of St. Mihaela and elementary schools, where the Šmihelska path begins. The route is moderately demanding.

The way to St. Primož is one of the most popular and traveled routes in Savinjska. The path, marked with markings, rises steeply from the church on Rosulje in Ljubno ob Savinji, through the forest, past the scenic farm on Sedel, to the destination near the church, where there is time to stop on one of the benches. The starting point is Ljubno ob Savinji, the TIC point, where you can park your car and go to the cemetery and then further through the forest to your destination.

Potočka zijavka (Potočka zijalka) is an important cave site on the slopes of Olševa. In this 104 m long and 40 m wide cave, Ice Age hunters left behind spears, needles, awls and other tools, mostly made of cave bear bones. The trail is moderately difficult, suitable for families.

STARTING POINT: Accommodation Valentina or Inn and Museum Firšt, 995 meters above sea level - from the village of Solčava, 2 km in the direction of the Logarska dolina.

Čreta is one of the peaks of the Dobroveljska Plateau. Dotted with forests, meadows and, at the right time, delicious forest fruits such as blueberries and cranberries, it is a good choice for a mountain trip.

DEPARTURE: Kokarje, you can park at the Laze sports center

The potter's path leads from Nazarij through parts of the Zadrečka valley. You will visit Žlabor, Kokarje, Potok, Pusto polje and Lačja vas, where the famous black pottery from Zadrečka was well developed in the past. The second part of the route leads across Gorica, a forested tertiary terrace between Savinja and Dreta, where potters once dug clay for their products. The caves, which are still clearly visible today, are archaeological documents of traditional pottery in Zadrečka.

Treat yourself to a trip to the extinct Smrekovec volcano. From lower Brložnik to Smrekovec, an easy mountain path climbs, which leads to a viewing ridge with a characteristic stone pyramid.

An easy, one and a half hour long route takes you along the Savinja River among the ethnological attractions of Ljubno ob Savinja, related to flossing, sawmilling, lime burning and many others.

Go on a pleasant half-hour walk from the magical, 250-year-old Žagerjeva homestead mill, from where the path leads past a large lake with a variety of animal and plant life to the refreshing Repevo waterfall.

STARTING POINT: Turn left in the center of Luče, in the direction of the Podvolovjek valley after about 7 kilometers, pay attention to the signpost Repov Slap on the left. The circular route starts at the charming Žagerski mill. The route is easy.

The spacious and beautiful pre-Alpine plateau Menina planina is a popular hiking spot. The picturesque Menina planina plateau belongs to the extremely interesting natural beauties of Slovenia. It is decorated with a rich forest reserve with more than 100-year-old trees, dreamy pastures, karst caves and microclimatic peculiarities. The views of the Kamnik-Savinjske Alps are especially beautiful, and the mysterious Jespa cave is an exceptional attraction. There is also a mountain hut on the mountain, Dom na Menini. Several paths lead to Menina mountain. The routes from the valley are significantly longer and therefore more demanding. You can also choose easier hiking trails that lead along the top of the mountain and are also suitable for families. Access by car is possible all the way to Dom na Menina planina.

Ethnological route through the Logar Valley

The naturalistic-ethnographic route through Logarska leads through lush corners of indescribably beautiful nature and the rich cultural heritage of the Logarska dolina landscape park. For the 7 km long route, you will need about 3 hours of moderate walking in one direction. You can join the trail at several places along the valley and thus shorten the trip if you wish.

STARTING POINT: Logarska dolina, Solčava. Drive to Solčava (to get there from the direction of Celje, via Kranjski Rak, Pavličevo sedlo or from Črna na Koroškem) and continue towards Logarska dolina. About a kilometer after where you enter the Logar Valley, you will notice wooden signposts on the right before crossing the bridge. The end point is the Rinka waterfall.

The old green beauty of the Solčava yew has always attracted curious travelers who admired the massive wooden structure. See it on a pleasant themed route. It is more than 700 years old and ranks among the oldest trees in Slovenia. It is protected as a natural value of national importance. In 2001, her chest diameter was measured at 108 cm, her height was 13 m, and her girth exceeded 340 cm. Solčava yew is reached by a marked circular forest themed trail from Solčava, which takes about 1 hour and 15 minutes of walking.

Wandering along the 37 km long Solčava panoramic road is a paradise for cyclists and photographers. The Solčava panoramic road lies in the lap of Karavanki and the Kamnik-Savinja Alps. One of the most beautiful scenic roads with a rich cultural, ethnological and natural heritage can be seen on foot, by bicycle, motorbike or car. Friendly locals at self-sufficient tourist farms in the highlands refresh travelers with delicious home-made food. Visitors are accompanied on the way by the mighty dragon Lintver and the brave shepherd boy Kristof, who promises a reward to the one who helps him find the lost sheep.

Robanov kot is a glacial valley in the Kamnik-Savinjske Alps, comparable in beauty to the neighboring Logarski Valley. Isolated farms and homesteads give the valley a particularly hospitable image. The Roban farm together with the Govc, Vršnik, Knez and Hudej farms uniquely characterizes the cultural landscape of the Robanov kot, which is becoming a popular tourist spot for nature and hiking lovers. After about an hour's walk, we arrive at Roban's planšaria, which is one of the few still living mountains in Solčavské. We turn into Robanov on the road between Luče and Solčava. Bicycles and motor vehicles are prohibited in the park.

The route from Rečica to Golte

A demanding marked mountain trail leads from Rečica ob Savinja via Dol-Suha to the Goličnik farm and the Ston hill. It continues to Mozirska koča in Golte, where the colorful Alpine Garden is located. Most of the routes lead on well-trodden paths, some on asphalt. The distance is 7.34 km. 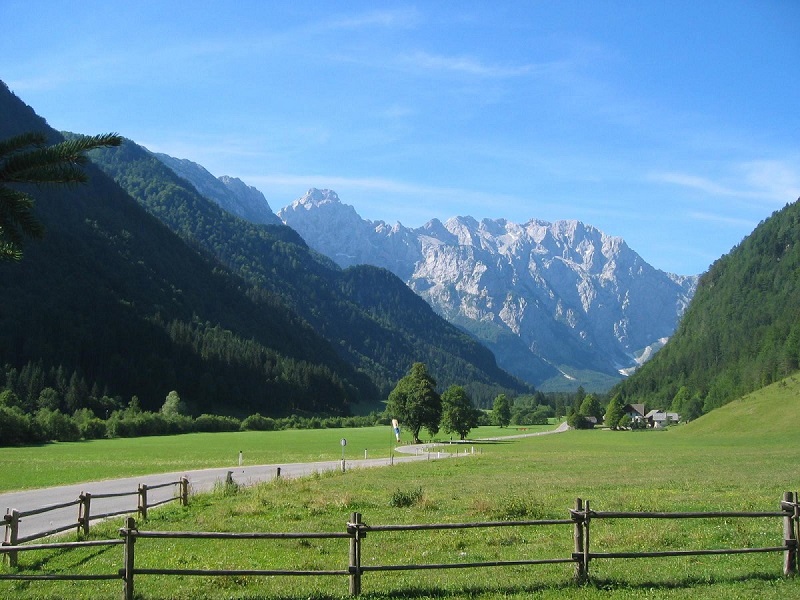 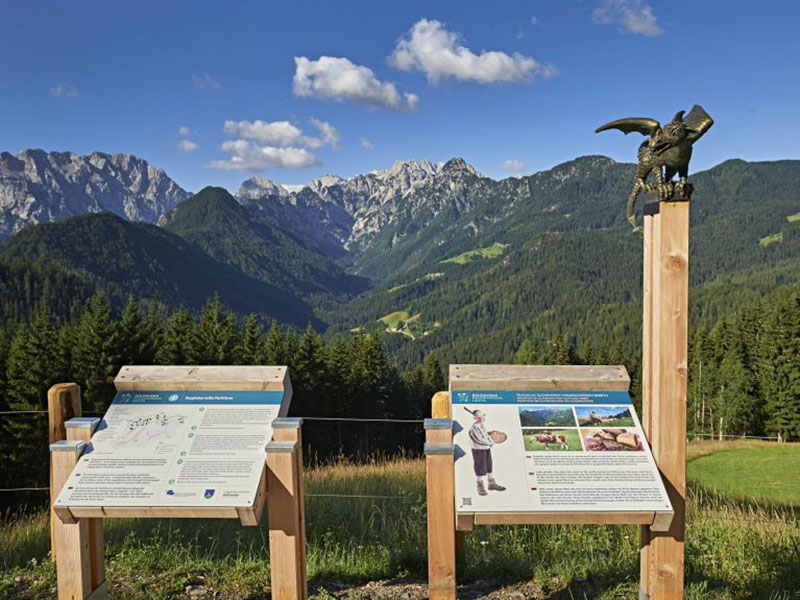 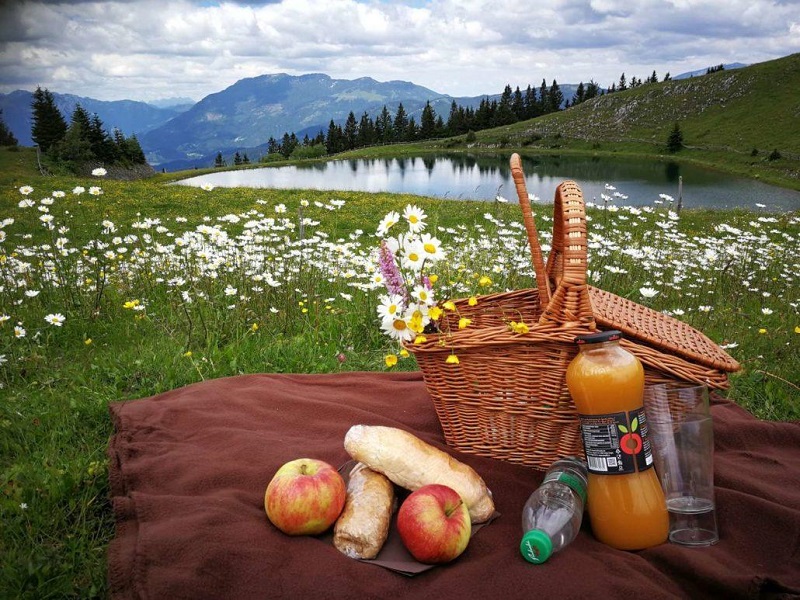 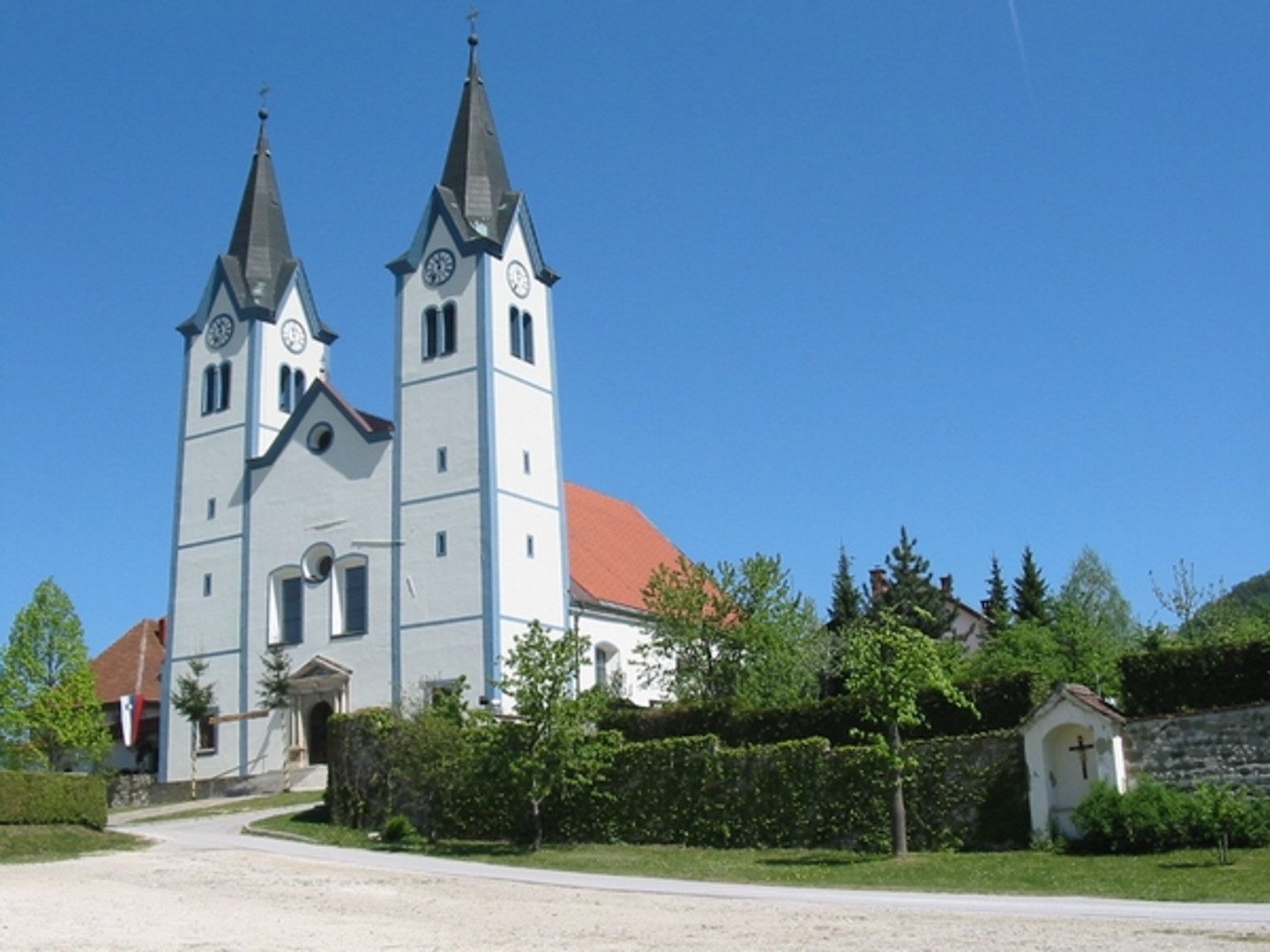 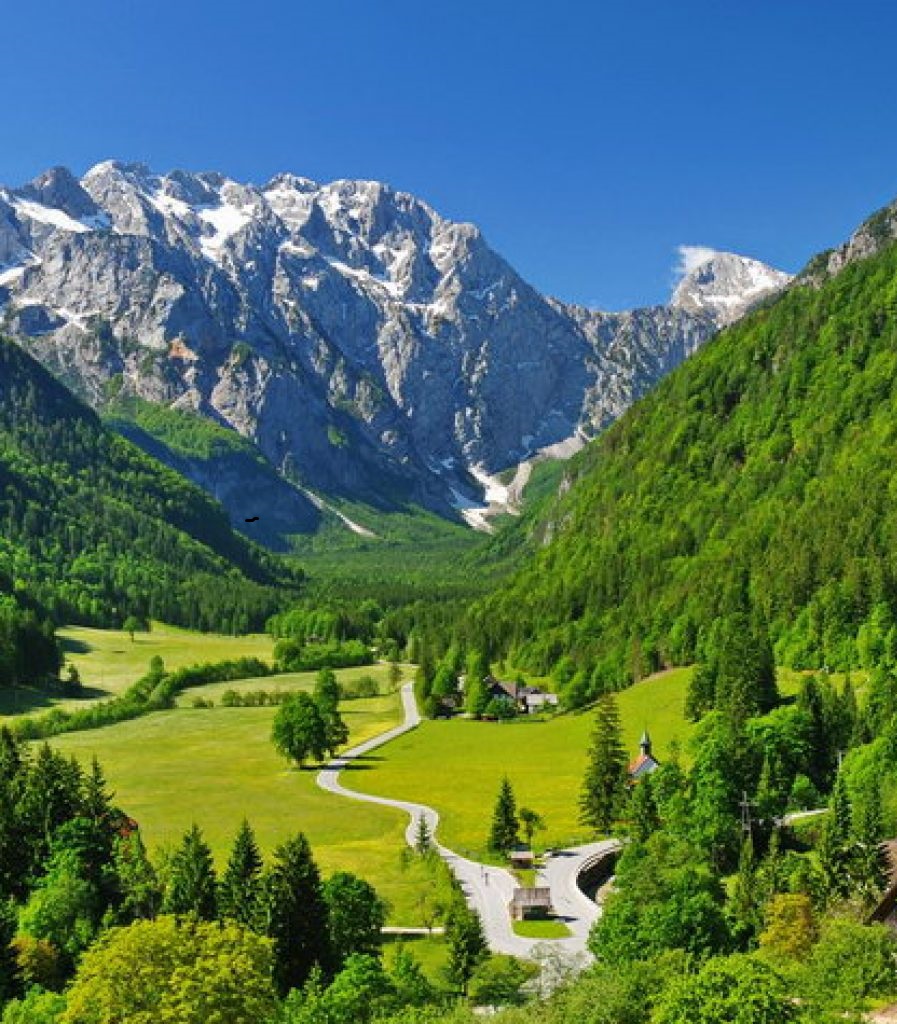